Home / Freight Info / Important function of a bill of lading

Important function of a bill of lading

fresawebsite February 17, 2016 Freight Info Comments Off on Important function of a bill of lading 640 Views

Multi-Modal and Inter-Modal transport are same.. or not?

In order to answer this question, let’s explore the functions of the bill of lading in detail..

A Bill of Lading (B/L) has 3 basic functions or roles as below (in no particular order)..

1) Evidence of Contract of Carriage

The B/L is the EVIDENCE of the contract of carriage entered into between the “Carrier” and the “Shipper or Cargo Owner” in order to carry out the transportation of the cargo (not to be confused with the sales contract between the buyer and the seller)..

3) Document of Title to the goods

This role of the bill of lading decides who is the owner of the title to the goods based on which cargo is released..

So out of these 3 functions which is the most important function of a bill of lading..??

In terms of container business, below are the most types/common methods of issuing a bill of lading:

All above types of bills of lading satisfy functions 1 & 2 – Evidence of Contract of Carriageand Receipt of Goods but only an Order Bill of Lading satisfies function 3 – Document of Title..

Why don’t the other two types satisfy function 3..?? Let me explain..

1) When a B/L is issued in Original(s) to a “named” consignee it is referred to as a “Straight B/L” and a straight B/L is a NON-NEGOTIABLE & NON-TRANSFERABLE DOCUMENT.. The bill of lading stationery will not have the wordings Straight Bill of Lading but may have Ocean Bill of Lading or Port to Port Bill of Lading written on the top..

Release of cargo at destination may be issued ONLY to the named consignee and ONLY upon surrender of at least 1 of the original bills issued.. This release condition is subject to the COGSA (Carriage of Goods by Sea Act) of relevant countries and jurisdiction..

A Straight B/L does not satisfy function 3 (Document of Title) as the document is neither negotiable nor transferable..

2) When a B/L is issued to a “named” consignee but without any originals and using a Seaway Bill or Waybill stationery, it maybe considered as a “Seaway B/L“.. This B/L is also a NON-NEGOTIABLE & NON-TRANSFERABLE DOCUMENT..

Since no originals are issued in the case of a Seaway B/L no surrender is required..

A Seaway B/L does not satisfy function 3 (Document of Title) as the document is neither negotiable nor transferable..

A ready reckoner on which type of bill of lading satisfies which role (in a container shipping environment) is given below..

An example of how each of the above bills of lading will be consigned and how it relates to the above functions is shown below.. 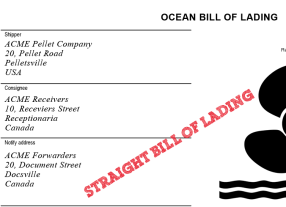 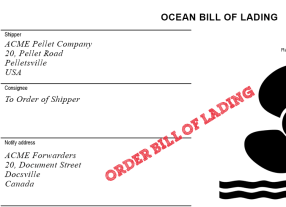 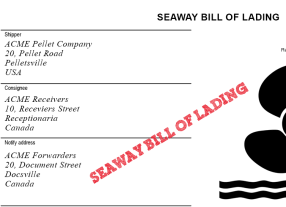